The Art of Becoming

Click and drag to move the slider left and right to see the town of Camrose and Mirror Lake change over time.

One of the most noticeable changes between the 1940s and 1960s is the creation of the East/West highway across the lake which would become Highway 13. Before this road was constructed, the North/South road across the lake was the only way across. In these images, the North/South road, built on the site of the original dam from the early 1900s, remains connected to the roadways in Camrose. This avenue is now a pedestrian bridge across the lake, linking a network of paved pathways around the lake.

Camrose was not always Camrose… 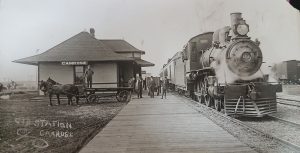 Camrose began as the Hamlet of Stoney Creek in 1904, named after the creek from which Mirror Lake was born that runs through the area. Between October 30, 1904, when the first church service was held in Stoney Creek, and the ‘Fall/Winter’  of 1904, the blossoming little settlement became known as Sparling, and was even receiving mail. Sparling incorporated as a Village May 4, 1905. The railway was the first to dam the lake where the current pedestrian bridge is in the early 1900s. Due to the immense early (and, to some degree, lasting) impacts of the railway in the area,  the similarity of the name ‘Sparling’ to the towns of Stirling and Sperling, in Alberta and Manitoba respectively, prompted the town to change its name to Camrose in 1906. This made the town stand out on the railway timetables, and began the process of forming a unique identity.

Before Mirror Lake had a name…

Until 1961, when the Chamber of Commerce sponsored a naming contest, the lake in the centre of the city was merely referred to as ‘the dam’. The lake was created in early 1900 as a reservoir for the railway’s steam locomotives, and had grown when the dam switched locations further downstream, creating a total of three basins. The naming contest marked a pivotal moment for this icon of Camrose, as the city recognized the importance of the lake to the history of the area, and the lasting impact the lake could have on the future. The choice to name so central a feature to the community solidified the lake’s importance in the minds of the people. To choose a name using a contest opened participation and engagement to everyone. Camrose intentionally created its own identity, and did so in a way that involved the members of the community. Mirror Lake won the contest, fittingly, as the calm waters reflect the picturesque grandeur of the urban park and surrounding sights. But the lake is not only a physical mirror, but also a reflection of the ideals Camrose chose to retain moving forward, including the old Russian Poplars, planted more than sixty years ago by a community member, the pathways offering increased access for those with limited mobility, the addition of a playground. The Lake, and surrounding park, encourage participation, interaction, engagement from all ages regardless of one’s stage of life.

Cracks in the paved pathways around Mirror Lake.

Sometimes it’s hard for me to not imagine Mirror Lake as new. There is a metal and plastic playground, metal art exhibits. There is a parking lot, a gazebo, and paved pathways. But that is where the age begins to show through. The paved pathways hold cracks, paved over gravel trails that once encircled the lake, scattered over the dirt animal and walking paths which came before. Despite its human creation, the lake holds a history far older than any of us can imagine, unless one has lived to their 118th birthday. Pe-O-Kis, a prominent member of the early Camrose area, and a Cree elder, lived past his 125th birthday in 1936 in this area. The history plaques surrounding the lake don’t mention him. Their age shows in the yellowing of the protective ‘glass’ cover, the fading of the lettering and images from constant sunlight. The glass holds an imperceptible fog that clouds and masks the history. The reader must strain ever so slightly to glean the information it holds. Yet they are so young. Beneath the lake’s surface rests decades of stormwater drainage remains, silt and debris, swept across streets and sidewalks by the spring melts, carried down into the lake where the water settles before passing on. The debris falls from the embrace of the current as it calms, and the lake little by little lessens. Shrinks.

Sources cited on this page:

“Camrose.” Central Alberta Museums: Unlock the Past with CARMN. http://www.unlockthepast.ca/Camrose

“How Mirror Lake got its Name.” Camrose Now Online. http://www.camrosenow.online/node/54767